Watching the Voxeljet VX1000 patiently print sand moulds in the print box, layer upon layer, becomes a kind of meditation. Many readers will have become entranced watching the continuous thread of a PLA 3D printer, for example, being spun into form, from virtual to actual object. The Voxeljet has this similar power of hypnosis, sand layer, print, sand layer, print and so on.

Having modelled the Difference-Tone Bell in SolidWorks software, and then modelled the 2-part sand mould required to cast this bell form, the Voxeljet printed the sand mould sections are ready to be cast into. Before casting the mould surfaces need a graphite-based foundry paint to be applied and set alight. This both hardens the casting surfaces and drives residual moisture away from them. This is usually completed as the metal is being melted in the furnace. The warm mould sections are assembled and clamped together, ready to receive the molten metal.

The negative space inside the mould is filled with liquid bronze, which runs like water at the temperature of 1100 degrees Celsius.

When the mould has cooled the sand can be broken away leaving the casting free to be cleaned, and then fettled (that is, to have its in-gate and airing systems cut away).

The second half of casting a bell is the tuning process. If the design calculations are accurate the bell will be cast close to its desired tuning, with hopefully a small amount of metal needing to be removed to fine-tune the partial frequencies to put them into the necessary array.

It can be a slow process to change the bell’s profile carefully to shift partial frequencies into their proper relations. 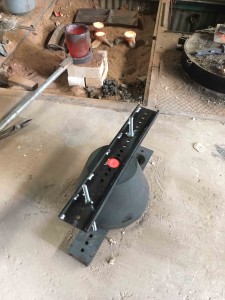