Working at Lab 22 CSIRO Material Technology has introduced me to scientists and mathematicians working in fine precision and exact language. It has inspired a desire in me to make a number of instruments of ‘mathematical analysis’ as helpful (!) aids in their calculations. I am imagining hand-held titanium, 3d printed, calculation instruments, as kinds of Swiss Army penknives, hung on their belts, ready for intellectual application.

I have been looking at the founders of the craft of numbers, the ancient Greek philosophers, and thinking about the sort of mathematical tooling they might have fashioned had they access to the high-powered, digital, rapid-prototyping equipment available at Lab 22.

For example, Archimedes of Syracuse developed ideas about infinitesimal forms that predate the development of calculus by Leibniz and Newton. All three considered the convergence of infinite sequences that underwriting ever-finer measurement of change. How helpful would it have been for Archimedes to have fashioned ‘Archimedes Infinity tool’ so that may have fallen into the hands of Newton and Leibniz at the moment of need?  Here is that instrument. 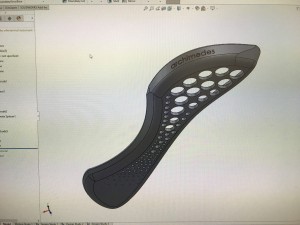 Other examples of the Mathematical tool set include the puzzle of doubling the cube, a mathematical proof Plato set his students. In this ‘Plato’s Gamble’ instrument I have trapped one cube within another, with the inner cube a dice. Entry into the Academy put students in the way of Plato’s gamble. I also love that Euclid unravelled the golden ratio of proportion, and at 1.618, it is the absolute and final ‘cut-off’ point for beauty. Appropriately, ‘Euclid’s Golden Scissor’ can serve this function in aesthetics. 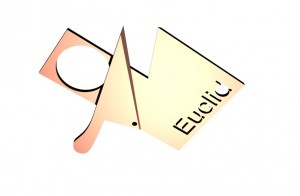 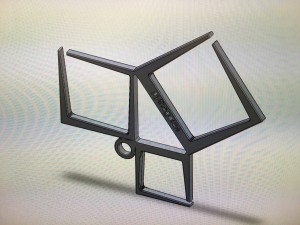 Mention should be made of another useful tool of mathematics. This is the ‘Pythagoras Musical Triangle’ in which his famous proof of the relationship between sides of a triangle has been altered to include a musical scale, another of his revelations. 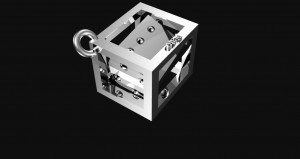 These small artworks will be laser printed when the opportunity arises, but for the moment our focus is on creating 3D printed directly in metal, musical bells.

An important part of my practice as a sculptor has been to invent helpful objects and instruments for the cutting and dicing of ideas. As a young sculptor, I produced a set of philosophical tools including ‘Kant’s Reality Tester’ and Schopenhauer’s Religion-Scissor’. This was followed by “Instruments of Psychology’, a series of sculptured doctor’s bags with constructions on their opening to might illuminate the central paradox each particular psychologist grappled with in their theoretical musings. 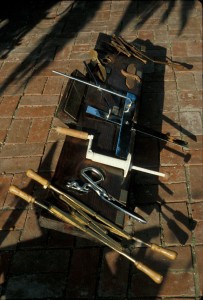 My practice developed definite themes in the early 1990s around finding ways through image, form and sound, of ‘tuning’ in country around Mia Mia, where I live. Seeking resonant frequencies that catch to rhythm and beat of the Australian landscape which continues to be slightly unfamiliar, even strange and threatening, to the non-indigenous amongst us. I mention this because some of the works made over the years to explore these ideas are instruments and ‘tools’ of various kinds which will better illuminate my attraction to ‘useful’ sculpture (the definition of sculpture, when I was a student, rested, unconvincingly to my mind, on being objects that were useless).

This program of enquiry, now 35 years in the making, has developed in three parts. The first part’s task was to devise a metaphorical method to let all of us see the country with fresh eyes, as if for the first time. The second part was to follow the example of Ludwig Leichhardt and to encourage our leaving the coastal hinterland and travel to the interior. The third, and I think final part, asks the question, how can we sustainably live in our country beyond exploitation, that is, how are we to live in tune with the visual, sonic and visceral patterns of experience of our country?

In 1994, I made sculptures and bells, prints and drawings imagining fishing trawlers leaving Port Lincoln with citizens on board bound for the Great Southern Ocean. I made a group of life-sized diving suits (as if fabricated in someone’s shed) to be used to lower people into the freezing and darkening sea to a depth at which they could only-just feel their bones, and so embrace the reality of their mortality, to arrive in the moment, to become present. When pulled up into the light and ‘born again’ upon the trawler deck, and taken back to Port Lincoln, surely, people would feel the eucalyptus tree’s strange indifference to their presence and, for the first time, ‘see’ that this is a country not scaled to human domestication, but operating at orders of magnitude that are ineffable to suburban dreaming. We might then tune into the ‘resonant frequency’ of the country, and be able to resist urges to shape the landscape patterned to ideas fashioned overseas.

The second part of this project was to draw people from the coast inland. The simple and overwhelming truth for Leichhardt was that there was an inland sea, that he would be irresistibly drawn to it, and after a frolic in its waters he would make the traverse to the regions of Perth. In 1848, he set out and we await his return. Meanwhile, I determined to make more suitable navigational instruments for his further use. Each instrument I invented for him is kept in proper adjustment through its connection to the landscape. The Lunar Navigational instrument tracks the shifting glint of the moon across a bronze orb in a small water container, and by marking that journey throughout the night the instrument leaves a curve scraped in the sand. Some rudimentary calculus of the curvature directs the pathway forward. There is a ‘Solar Navigational Instrument’ and ‘Over-the-horizon Sonic Navigation Instrument which sounds a small harmonic bell and collects its echo through an elaborate ear piece. Close to the continental centre there is the ‘Inland sea Shell Navigational Instrument’ which is a cast bronze shell with ear piece on a bearing turntable allowing one to turn and listen for the loudest archetypal crash of waves, and an arrow to point out where this is coming from. 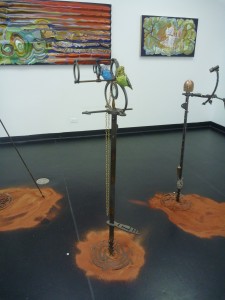 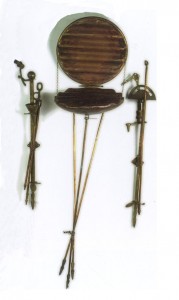 The ‘Water finding navigational Instrument’ is cleverness itself, if the psychology of birds is ever clever. Three magnifying glasses are aligned to make an adjustable telescope and two cast bronze budgies are perched upon it in splendid colour. At dusk, the flock is attracted (especially to the blue budgie) and visit with our decoys, only to, eventually, bore of their stiff company and wheel away toward the nearest waterhole. By following the line of sight with the telescope, one then merely follows by foot to the water. So, all the tools (there are more but it is too tiring to tell) that are needed and maps too! But not European drawn maps that can’t work in so flat and featureless plain repeated across Australia. Instead, beautiful maps beaten out against the anvil earth in copper sheet, taken along for the purpose. Here every scrape and mark of the earth itself is transferred to each map, including the marks of previous and ongoing occupation, and in this way the subtle topology of a plain is captured as no eye can discern. Only the touch of a finger can read the braille of Australia.

My current research is making a study of naturally occurring patterns; of the shifting distribution of birds on bodies of water, the ratios of rock and tree arrays in their placement on the ground as well as the rhythmical swirls of water flows coursing through creeks. Patterns that I suspect might be read as a kind of ‘sheet-music’, with which we can penetrate the surface and appearance of things to really ‘site-read’, or otherwise sense, feel and hear the orchestral truth of our Australian experience, that we belong to it, not it to us, and that we serve its song-line needs rather than have it serve those tuneless needs of our own. 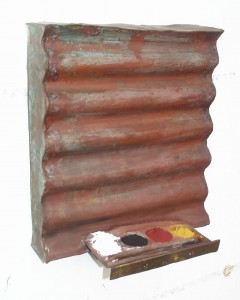 I am also making a series of cast bronze and fabricated stainless-steel tuning-fork instruments intended to amplify the ambient soundscape of the bush, to distinguish those resonant frequencies that generate the landscape’s background ‘hum. An interesting report in the AGE newspaper (Sunday 10th December from the Washington Post titled ‘Deciphering the Earth’s mysterious hum’ (pp8), reports that the “earth is ringing like a bell all the time”, and that sea movement, volcanoes and earthquakes are vibrating the planet at frequencies between 2.9 and 4.5 milli-hertz. I have experienced that sublimated ‘hum’ in the active silence of Uluru in Central Australia, and have heard reports of a whooshing sound across Antarctica as trapped air continually escapes ice.

My next blog will concentrate on the work of 3D printing forms in metal.